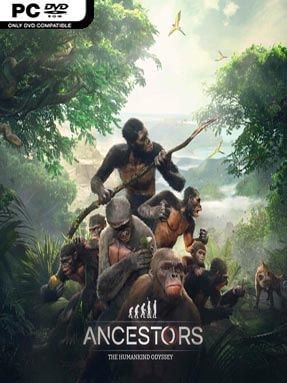 When it comes to primitive people, we think of a savage with a club at his side, dressed in a dead mammoth skin. But there’s not much information about the earlier period. «Ancestors: The Humankind Odyssey» takes the player back 10 million years. In the game you will literally have to try on the skin of an ape ancestor and go the way of evolution. That said, there is no plot in «Ancestors: The Humankind Odyssey» no. The player is simply launched into the world and left to his own devices. Survival requires getting your own water and food, as well as a sleep schedule.

The game controls are reminiscent of those that were in the series of games «Assassin’s creed». And it makes sense, since the development was managed by a former designer of the company «Ubisoft» Patrice Dezele. When your character looks at an object, action options are displayed depending on the situation. Objects can be examined, smelled, picked up. This is how information about the world is gathered.

There is no map in the game, but during the game you will be able to mark interesting places and remember their location. The evolution process takes place through a special menu, which is available during sleep. A neural network opens in front of you. The hero’s actions affect which nerve node develops. If you run a lot, climb trees – The movement branch is pumped up and so on.

В «Ancestors: The Humankind Odyssey» has an unusual system of changing items. You can, for example, take a branch and use the stone to strip the bark off it. You get the stick – One of the first tools of ancient man. When processing, the player must respond to the audio cues, releasing the action button in time so as not to break the item.

The game’s animal world is populated not only by primates. You will meet snakes, wild boars, eagles, crocodiles and even saber-toothed tigers. At first, the apes will be completely defenseless. In the process of development will be available evasion, hitting, counterattack.

Apart from the physical indicators (food, water, sleep) you will need to keep an eye on the psychological state of your character. If you go to the unknown territory, you will have panic, and then hysteria. A frightened specimen is able to get out of the player’s control and disappear into the wilds. To conquer your fears, explore the area in intelligence mode, as well as use your sense of smell and hearing.

The main challenge «Ancestors: The Humankind Odyssey» Evolution remains. Before you move on to the next stage, think about the reproduction of the pack. The more kids you have in your tribe, the more skills you will be able to keep while changing generations. Each cub allows you to genetically fix one trait. Eventually, the primate will evolve into a upright human, learning to use tools. Rumor has it that a second part of the game is already planned, where you will have to evolve further.

«Ancestors: The Humankind Odyssey» – It’s not a one night game. The most powerful impression of the game is that the gamer chooses the path that the monkeys will follow. No two walkthroughs are ever the same.